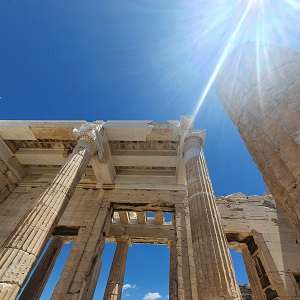 in Exhibitions, Inspiration
by Thea

As one of the best examples of architecture from the classical period of Ancient Greece, the Acropolis of Athens attracts more than a million visitors each year.

The Acropolis and the Parthenon

Before visiting, I assumed the Acropolis was the name of the impressive columned building that dominates the site (the Parthenon), but the title encapsulates the whole hill.  I didn’t expect the Acropolis gateway to be so massive! Talk about setting the stage…

The word “Acropolis” comes from two Ancient Greek words that translate to ‘highest point/extremity’ and ‘City’ describing the highest point of a settlement. Used for military defences, there were many acropoleis established in Greece.

While sadly, the legendary 30-foot giant bronze statue of Athena Promachos by Greek sculptor Phidias is long gone, the Athens site still houses structures such as the Parthenon, the Erechtheion, the Propylaea and the Temple of Athena Nike, all commissioned by Pericles and constructed or rebuilt between 447 BC and 406 BC.

The Acropolis is located on a flattish-topped rock that rises 150 m (490 ft) above sea level with a surface area of about 3 hectares (7.4 acres). The Parthenon is 14 meters tall (around an average 3-story UK building). The Parthenon’s exterior Doric columns measure 1.9 metres (6.2 ft) in diameter and are 10.4 metres (34 ft) high.

Up to 16,500 marble parts and 9,000 marble roof tiles were used for the Parthenon’s construction (says Google – I didn’t count), and all marble would have been transported to the site from Mt Penteli, 20km (12,5 miles) away.

The construction was meticulous with each corner column made slightly thicker than all of the others and thinning curves at the top of each individual column, yet, scientists still haven’t figured out how the Greeks managed to create something so perfect, all by hand.

I once imagined active ancient Greek citadels in uniform stark white, but reading and visiting museums over the years has helped to visualise the rich vibrant colours that would have adorned these structures in days of old.

Walking the site to experience the scale of it and imaging what it would have felt like to visit the busy Acropolis with all of the structures fully intact in their colourful glory is undoubtedly an awe-inspiring experience. I wanted to capture mental and physical pictures of ALL the structures and pretty much everything I looked at in the nearby purpose-built Acropolis museum for creative inspiration.

I was sketching that same evening and wishing I could 3D print ideas from my eyes to my brain and right into my hands – if only.

In addition to these three points, I would recommend you arrive at the Acropolis site quite early (it opens at 8.30am), or late (the site ends admission at 7.30pm for an 8pm close). I didn’t experience any guides hurrying me up the steps as I tried to take a break or snap pictures but this is common; when it’s busy, they want to keep the crowd moving forward.

You can read more about my Acropolis-inspired work in my next post.

Search the current range for creations that are meant to be yours.